At its Ignite show this week, Microsoft plans to update its users on a number of security products and updates, including a plan to eliminate passwords for good through its Authenticator app, which works with Azure.

When Microsoft starts its Ignite conference this week, the software giant is looking to close the door for good on an era of complicated log-ins and security passwords.

On Monday, company executives plan to announce that customers will now be able to access Azure Active Directory applications with no passwords through the Microsoft Authenticator app. This app eliminates passwords and uses a combination of the user's smartphone, fingerprints, face identification or PIN to access the software and data that they need for their jobs.

"Nearly all data loss starts with compromised passwords, and so today we are declaring an end to the era of passwords," Rob Lefferts, corporate vice president for security at Microsoft, wrote in a September 24 blog post about the announcement. "We are delivering new support for password-less login via the Microsoft Authenticator app for the hundreds of thousands of Azure AD connected apps that businesses use every day." 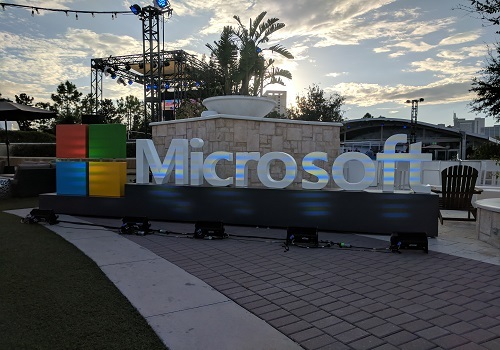 For several years now, Microsoft and other security and IT vendors have been looking to move away from passwords, which have proven problematic and a weak link in the security chain, to other methods to better secure hardware and software, including multi-factor authentication and biometrics, which include facial recognition and fingerprints. (See UNC Researchers Pitch Framework to Fight Password Reuse.)

Earlier this year, Security Now contributing editor Jeffrey Burt wrote about a research paper from the University of North Carolina's Department of Computer Science that details a framework that will keep users from reusing passwords by having websites work together. (See UNC Researchers Pitch Framework to Fight Password Reuse.)

With its announcement on Monday, Microsoft is looking to take the issue to the next logical conclusion: Why burden IT and security with passwords at all if there are better and more secure alternatives?

Rob Enderle, an analyst with the Enderle Group, notes that companies such as IBM have been looking to eliminate passwords stretching back to the beginning of the computer era in the 1980s.

"Microsoft then moved to their authenticator app, and Google moved to more tightly integrate dual factor authentication into Android," Enderle wrote in an email to Security Now. "Google's implementation was more seamless but then they owned Android while Microsoft had to approach the problem with a number generating app and later a more streamlined appearance."

Still, in Enderle's opinion, Microsoft still has a way to go.

"To further close the gap Microsoft will need to showcase both improvements on ease of use and deeper penetration with partners who will use it to authenticate. They need both quality improvements and penetration because even the best tool is no good if it doesn't have a critical mass of folks that'll use it," he wrote.

Security focus
In keeping with this theme of less reliance on passwords, Microsoft is also rolling out a new security program called Secure Score, which offers a scorecard for cybersecurity. For example, it will offer advice to customers about whether to use multi-factor authentication for secure admin accounts or turning off client-side email forwarding rules.

Other product updates include:

In addition to products, Redmond is bragging about its own cybersecurity and threat-hunting capabilities.

In his blog post, Lefferts note that Microsoft employs about 3,500 security professionals and uses a combination of artificial intelligence and machine learning to analyze 6.5 trillion global signals each day. The company's Digital Crimes Unit (DCU) also blocks up to 5 billion malware threats each month.

Additionally, DCU has stopped 18 criminal botnets to date and removed 500 million from various command-and-control takeovers. It also shut down 84 fake websites in the last two years that have been used in various phishing attacks orchestrated by a group called Strontium, which is allegedly aligned with the Russian government. (See Microsoft Yanks Suspected Russian-Intelligence Domains.)

Finally, Microsoft is expanding its Defending Democracy program, which looks to protect political campaigns from attacks, as well as disinformation and other threats. Part of this is AccountGuard, which provides cybersecurity protection to candidates for no additional cost.

"We've had strong AccountGuard interest and in the first month onboarded more than 30 organizations," Lefferts wrote in Monday's blog post. "We've focused on onboarding large national party operations first and have successfully done so for committees representing both major U.S. parties as well as high profile campaigns and think-tanks, and we are working to onboard additional groups each week. Microsoft is developing plans to extend our Defending Democracy program to democracies around the world."