At the Gartner Symposium/ITXPO, IBM CEO Ginni Rometty talked a lot about the cloud, but also how Big Blue is leading in two cutting-edge developments: Quantum computing and blockchain.

ORLANDO, Fla. -- Gartner Symposium/ITXPO -- For IBM CEO Ginni Rometty, today might focus on the cloud, whether it's private, public, hybrid or multicloud, but the future belongs to quantum computing and blockchain -- and she believes that Big Blue has the lead over the competition.

Toward the end of Rometty's 45-minute Mastermind Interview here on October 16, with Gartner analysts Daryl Plummer and Dennis Gaughan, Rometty turned to the future -- both her's and the company's. IBM is focused on blockchain, as well as quantum computing. Each of these fits into IBM's tradition of building off original research and internal development to deliver commercial products. 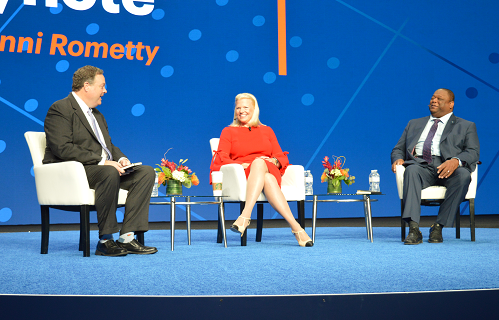 While Rometty might want to position IBM as the leader in both, other tech firms, especially major competitor Microsoft, are also likely to claim their superiority when it comes to blockchain and quantum computing. (See Unknown Document 736667.)

In terms of blockchain, which describes a distributed database or ledger that can be used to track ownership of digital or physical objects, IBM has been building its offerings off the Hyperledger Fabric administered by the Linux Foundation.

Rometty believes that the key to the company's success is not so much in helping to develop the technology, but in the partnerships its building. (See Unknown Document 736485.)

She cited several examples, including its Food Trust Solution, which uses blockchain technology to ensure safety and security within the supply chain that supplies the world with about 2 million different products. Walmart uses the system and encourages its supplier to use it as well.

However, the megastore's competitors also use it. (See Unknown Document 735598.)

This is where IBM, as the honest broker, makes its mark.

"Everyone who thinks that I'm going to be the convener and anchor of the network -- that's not how things are going to happen," Rometty said, urging the audience to start investing in this technology now. "You are going to join onto networks and the key point is that it does matter who the network and what the business model is... and the reason we use Hyperledger is that it has private channels and you can be on with competitors. You can do what you need to do."

Rometty noted that in the example of the Food Trust, Walmart can participate without having to worry about competitors since the databases are distributed and the chain is built on trust. "I think what you are seeing is that no one business can own these," she added.

Shifting the conversation to quantum computing, which is even more cutting-edge than blockchain, Rometty believes that companies will begin serious investment within the next five years, especially in areas such as wealth, risk and materials management, along with logistics.

"Twenty qubit is now up [and] live and we have run 6 million experiments through it," Rometty said. "Many of the people in this audience... we have it in manufacturing to banking, and you need to be playing around with it now."

In the future, Rometty said IBM hopes to offer up to 50 qubits, which will pass the computing power now offered by the world's largest supercomputers. "This will allow you to model things that you would need infinite compute now to do," she added.

At the same time, quantum computing can break current encryption standards once it reaches a certain qubits threshold. It's one reason why IBM is working on even more enhanced security, such as lattice-based cryptography, that will actually counter the effects quantum computing will have on current security and encryption standards. (See How Quantum Physics Will Protect Against Quantum-Busting Encryption.)

"So the world will be safe and that's [the company taking] responsibility by doing both at the same time," Rometty said.