New cyber threats materialize every day, getting more frequent and more sophisticated.  We all know about the game-changing Stuxnet cyberattack on Iran’s nuclear facilities back in 2010, but there’s no need to look that far back. A much shorter look back to 2014 will show us far worse: increasingly sophisticated attacks such as Flame, Shamoon and Havex that are as equally worrisome as “the Big S.”

Unfortunately, targeted attacks on critical infrastructure rarely make it to the news, and so they are shrouded in mystery to the point where some may even call them mythic.

There have been incidents, however -- major ones. Within just the past year we’ve seen multiple cyber espionage campaigns, including Dragonfly and Black Energy. We’ve seen physical damage occur as the result of a cyber incident, in the case of a German steel mill, widely reported in Wired and other media early this year, where “massive” damage resulted from a cyberattack that prevented the proper shut down of a blast furnace, according to a German report .

The “advanced threat” continues to evolve.  Newer malware has even been able to successfully breach a leading cyber security research lab. Duqu 2.0, which was discovered earlier this summer by Kaspersky Lab, has taken the title and is now being lauded as the “the most sophisticated malware ever seen.”  The cyber-espionage tool was authored by the same team responsible for the original Duqu, which in turn is believed to be a variant of that original Iranian-enrichment-debilitating media darling that threated industrial control environments back in 2010.

We’ve seen three targeted espionage campaigns against industrial environments that I know of; undoubtedly there are more.  Why is espionage so scary? Because espionage is used to gather intelligence that is needed to engineer targeted attacks.

This year at the 2015 Black Hat USA conference, we heard about how to cause physical damage through cyber means from some of the best.  Jason Larsen of IOActive  demonstrated how compromising a process control system is only the start of the work: it’s the physics of the process that can translate cyber manipulation to physical damage. To engineer a cyber-physical attack, you need a lot of information about the control system itself: the assets, parameters and measurements.

Getting back to Dragonfly, it seemed harmless enough: it only scanned the control system, collecting data about the process including assets and parameters.

Even more disturbing, as cybercrime advisor Raj Samani, pointed out at a Honeywell User Group Conference in San Antonio, while information stolen from most espionage campaigns surfaces on the black market, the information stolen by Dragonfly doesn’t seem to have surfaced yet. There’s no way to predict what it’s being used for, if anything. But those who’ve worked in security for a while can’t help but speculate: if understanding the details of a compromised control system is the first step in a difficult attack process; a targeted attack therefore seems the inevitable end result.

The threats are getting more sophisticated as attackers  continue to attempt to manipulate compromised industrial control systems in order to cause physical damage.  Meanwhile, the industry is just playing catch-up.

If we continue to treat the industrial cyber threat as a thing of myth and legend, it will only make the problem more real.

Eric D. Knapp is Global Director of Cyber Security Solutions and Technology for Honeywell Process Solutions. Eric is a recognized expert in industrial control systems cyber security. He is the author of "Industrial Network Security: Securing Critical Infrastructure Networks ... View Full Bio
Comment  |
Email This  |
Print  |
RSS
More Insights
Webcasts
Cloud Security Threats Enterprises Need to Watch
Are You Ready for When Cyber Attackers Get In?
More Webcasts
White Papers
Using AI to Power AppSec
[IT Trend Report] The Future of Cloud
More White Papers
Reports
Can You Spare 10-12 Mins to Help Us Out with a Survey on Tech Trends?
Got 7 Minutes? Dark Reading Needs Your Help With Our Survey on Incident Response
More Reports

One thing is the actual incidents, another thing is the unknown extortion demands that don't reach the media. Even if an attacker "just" show that they can enter and read data doesn't mean that the financial harm can't be substantial. Today, everyone is (or should be) aware of the damage leaked emails can do, for instance highlighted by the Sony Entertainment hack. How much will anyone willingly pay to avoid that? And how much would someone pay to avoid a factory break down like the German incident?
Reply  |  Post Message  |  Messages List  |  Start a Board

Like IoT device, cannot ICS and SCADA systems be red-teamed to death in order to discover critical vulnerabilities that might exist? Before someone takes advantage of them.  ICS devices are here to stay.  Its what we do with them and how we monitor and assess their cybersecurity and vulnerability that matters.
Reply  |  Post Message  |  Messages List  |  Start a Board

I agree with deep monitoring and defense in depth but new malware has evolved to the point where there are layers and layers of obfuscation. Making malware very transparent in most cases. IE: GlassRAT
Reply  |  Post Message  |  Messages List  |  Start a Board

"... a government source/backer, then the information wouldn't surface on the black market ..."

I hear you. You never know, the governments may expose it into black market if it targets specific countries. :--)))
Reply  |  Post Message  |  Messages List  |  Start a Board

I think it starts with a deep monitoring of your environment and doing analytics on the logs. I doubt that there would be a specific safeguard that can help, it should be levels of countermeasures.
Reply  |  Post Message  |  Messages List  |  Start a Board

It makes sense that being the target. Any piece of information could be used in many different ways as long as it relates to pharmaceuticals. Clinical trials and other things have high rate of ROI.
Reply  |  Post Message  |  Messages List  |  Start a Board

It really depends upon who is behind the attacks.  If Dragonfly, for instance, had a government source/backer, then the information wouldn't surface on the black market because it's not being used for immediate monetary gain -- and one can speculate as to whether or not that makes one feel better or worse about the breach of their information.
Reply  |  Post Message  |  Messages List  |  Start a Board

Getting back to Dragonfly, it seemed harmless enough: it only scanned the control system, collecting data about the process including assets and parameters.

Latest Comment: Yeah, so Dave said something about "a faster way to the top", next thing I know there's tthis ladder...

IT 2020: A Look AheadAre you ready for the critical changes that will occur in 2020? We've compiled editor insights from the best of our network (Dark Reading, Data Center Knowledge, InformationWeek, ITPro Today and Network Computing) to deliver to you a look at the trends, technologies, and threats that are emerging in the coming year. Download it today!
Download This Issue! 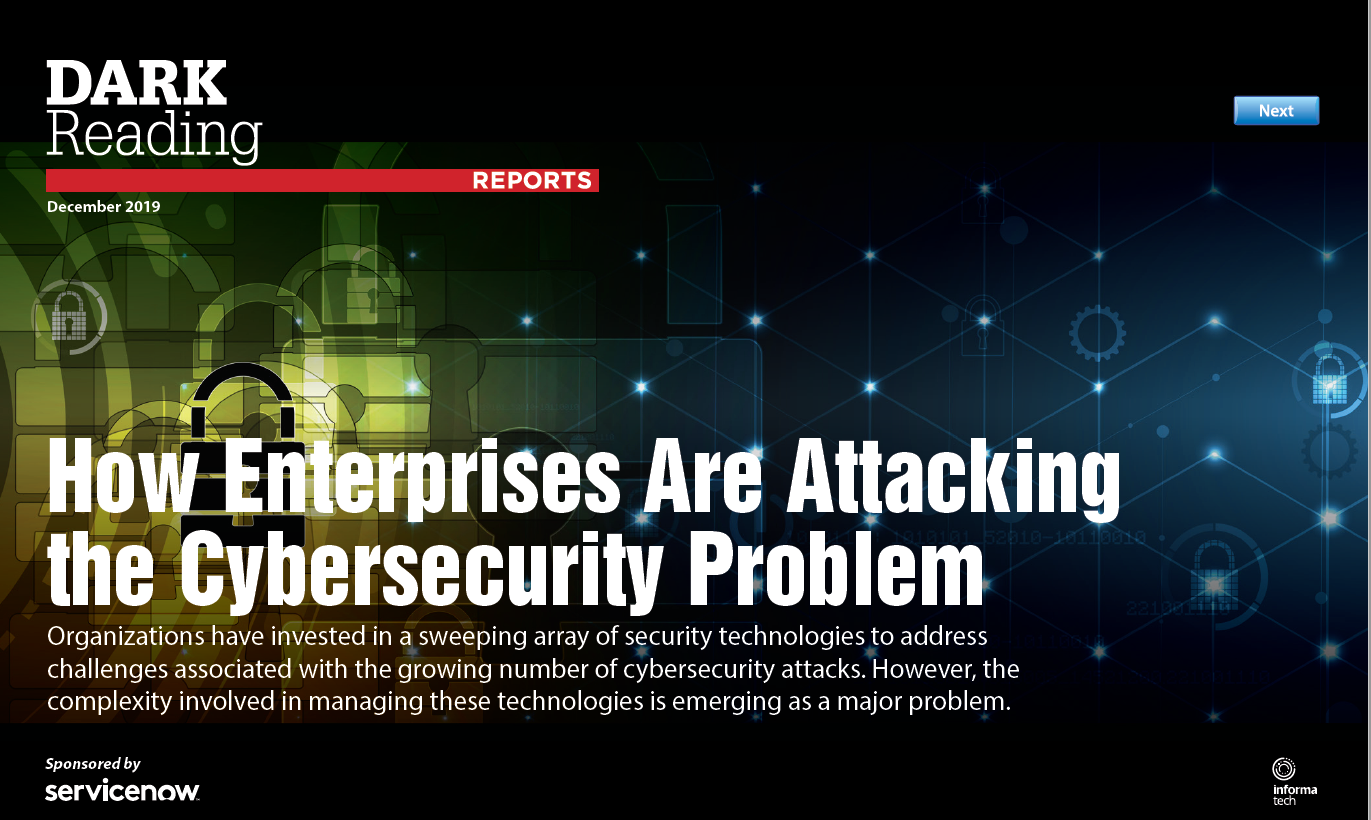 How Enterprises are Attacking the Cybersecurity Problem Organizations have invested in a sweeping array of security technologies to address challenges associated with the growing number of cybersecurity attacks. However, the complexity involved in managing these technologies is emerging as a major problem. Read this report to find out what your peers biggest security challenges are and the technologies they are using to address them.
Download Now!